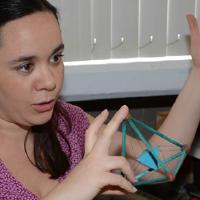 In the 70´s Coxeter considered the 4-dimensional regular polytopes and used the so-called Petrie Polygons to obtain quotients of the polytopes that, while having all possible rotational symmetry, lack reflectional symmetry. He called these objects Twisted Honeycombs. Nowadays, objects with such symmetry properties are often called chiral. In this talk I will review Coxeter´s twisted honeycombs and explore a natural way to extend Coxeter´s work to polytope-like structures, in particular, we shall see some properties and examples of so-called chiral skeletal polyhedra, and an application of them.

Originally from Mexico City, Isabel Hubard obtained her BS from the National University of Mexico, and her Masters and PhD from York University. Later she held postdoctoral positions at the University of Auckland and the Université Libre de Bruxelles.

Her research is centered on the study of highly symmetric abstract polytopes, a modern version of the Platonic solids that generalizes them to combinatorial objects of arbitrary rank or dimension; in her work, discrete geometry, combinatorics and group actions intertwine. Besides her contributions to the theory of abstract polytopes she has an interest in the outreach and education of mathematics. She has been the leader of the Mexico City Math Olympiad team since 2014, and the Mexican team of EGMO since 2015. She is currently the Coordinator of the Steering Committee of the “Red de Enseñanza Creativa de las Matemáticas” (Network for Creative Mathematics Education).