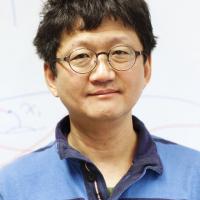 Some of the most remarkable achievements of science are the mind-boggling measurements it has contributed throughout history to our collective understanding of the universe. For example, a simple google search will reveal that the radius of our galaxy is 52850 light years, and that the Andromeda galaxy is 2.537 million light years away. You can also find out that the mass of an electron is 0.00000000000000000000000000091093837 grams. Sadly, I don’t think I will have time to discuss these great numbers in this lecture. However, I will mention a few simpler, but still great measurements in history and how they involved calculating with precision. I will also reflect on what our knowledge of such matters tells us about the nature of mathematics as human heritage.

Minhyong Kim is a mathematician working in the area of arithmetic geometry, which explores the interaction between structures of number theory and geometry with particular emphasis on the study of schemes of finite type over the integers. He is especially interested in applications of topology to number theory. Recently, he has started exploring the possibility of connections between arithmetic geometry and quantum field theory. In his spare time, he works rather seriously on educational outreach, including adult education, teacher training, and motivational talks for students. He has published four books in Korean on mathematics written for the general public.

Before Warwick, he held professorships at eight universities on three continents. Most recently, he was research professor of number theory at the University of Oxford and the head of their number theory research group.