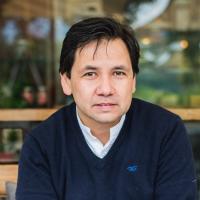 Conjugates, paths and groups of diffeomorphisms

In this talk I will explain how to use techniques from dynamical systems theory to study group theoretical properties of diffeomorphisms. A special discussion will be deserved to an old unsolved question raised by H. rosenberg, namely the path connectedness of the space of commuting circle diffeomorphisms. I will present several results on this, the most recent of which have been obtained in collaboration with Hélène Eynard.

Andres Navas performed studies at USACH (undergraduate), IMPA (master) and ENS-Lyon (PhD), and later he spent one year with a postdoctoral position at IHES (2004-2005). In 2008 he was an invited speaker at the ICM in Rio for his work on group actions. His book “Group of circle diffeomorphisms”, published by Univ. of Chicago Press in 2011, is a standard reference on the subject. Recently, he has done much work for the dissemination of mathematics, including several books, collaboration with the site “Images des Mathétiques”, and the creation of the Chilean Mathematical Festival.